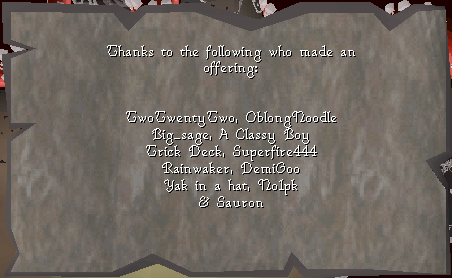 A sign can be found on the final level of the Stronghold near the Cradle of life thanking the players whose questions were selected.
Ghostly Robes
You are now able to re-obtain all pieces of the Ghostly robe set from any of the ghosts after Curse of the Empty Lord is completed. As a result, any number of each piece can be reclaimed. Talking to any of the ghosts will bring up the interface below allowing you to choose how many of each piece you’d like to receive.

The iOS closed beta test will go live later this after noon at approximately 2pm BST. For those that have been invited, you should have already received your message from us via email and the Message Center detailing your invitation (if you haven’t heard from us by now then unfortunately you haven’t been invited to this test). To mark the iOS closed beta test going live you will receive an email directly from Apple’s TestFlight service. This will be sent to the same email you provided when signing up for the beta. Currently, there is no planned end date for the iOS beta.

Thank you to everyone that has registered their interest and we look forward to hearing your feedback for those invited. 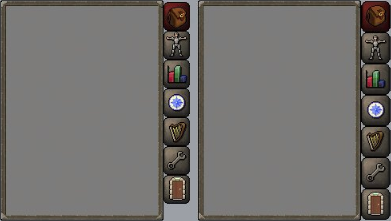 Chat options have been optimised to be a more similar size, overall this has increased the size of most options.

Master Clue Scroll Reward Competition
As mentioned in last week’s Q&A stream, we’re hosting a reward design competition. The design is for a cosmetic item to be rewarded to players upon completion of 100 master level clue scrolls. This can be an item for any equipment slot or a whole outfit – whichever you prefer! Email your entries to our community mailbox; OldSchoolCommunity@Jagex.com attached as a JPEG file, including your RuneScape display name (the name of your character in-game) and using the subject line Master Clue Reward Competition.

Be aware that if you include any icons or symbols in the design to keep them simple! Also bear in mind that items or outfits may appear darker in game. We’ll accept entries until September 10th and then choose three designs to be polled. The winning design will be chosen by the community based on which one receives the most votes. The winning entry will be put into game with further possible prizes to be confirmed. Make sure to read our competition terms and conditions before entering and good luck!